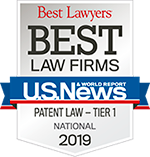 The firm has several attorneys who are experienced in rendering opinions as to infringement or noninfringement, resolving conflicts with infringers, litigating design patents in U.S. District Courts and appeals to the Court of Appeals of the Federal Circuit.

In 2017, for the 15th consecutive year, Banner & Witcoff obtained more U.S. design patents than any other law firm in the country.

Banner & Witcoff also continues to lead in procuring international design patent portfolios. The firm has filed hundreds of design registrations in the World Intellectual Property Office for clients who reside in member countries of the Hague System for the International Registration of Industrial Designs. The firm began seeking the same international protections for U.S. clients once the USPTO put procedures in place for accepting Hague System applications in May 2015.